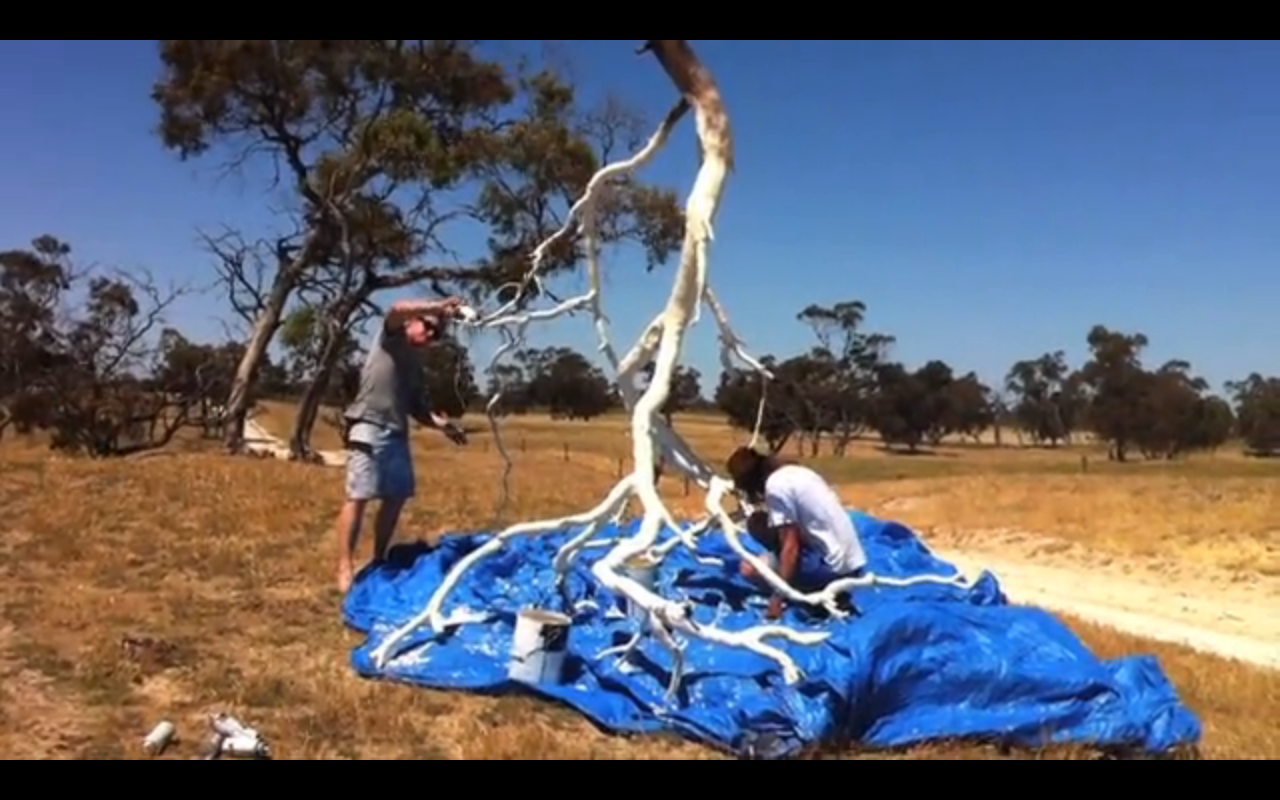 It was a mutual interest in collapsing the walls of the studio/gallery and making work in the open field that led to Henry and myself working through an exciting project for the launch of Tarpspace in late 2012.

Evolving from a range of initial ideas the work eventuated as site-specific action in Keith SA and resulted in­­­­­­ two subsequent public outcomes at Adelaide’s Fontanelle Gallery and Rearview in Melbourne.

Titled by co-ordinates 36°12’59″ S 140°15’45″ E 30M the intervention in regional South Australia transpired as an action of isolating a distinct part of the landscape and coating it in paint. The synthetic material immediately transformed the previously subtle form of a tree branch, which had fallen from a tree and miraculously come to rest upside down. The tarpaulin was utilised as a drop sheet to capture the residue of the painting action, as the existing form was climbed and covered entirely with thick white house paint.

Once covered the skeletal form began to take on a new recognition. It was simultaneously unusual and familiar, suggestive of naturally occurring formations such as a bolt of lightening or vascular system. Looking back on the work it draws on a historically rich and layered approach to the landscape in visual art, playfully questioning painting as the traditional heavy weight of this genre. Literally painting this skeletal formation bone white situated it as a highlighted and recently uncommon component of its own environment. Preserved against the elements by a durable skin, the end result is something reminiscent of an uncovered fossil and one eerily human-like.

The public outcomes at Fontanelle and Rearview in late 2012 came to articulate and reflect on the project in Keith. The object itself remained on site, but the tarpaulin drop sheet and subsequent images were used in Adelaide to reference and share the site-specific activity with a distant audience. In another happening at Rearview the walls of the Tarpcube were literally broken down by an old Landcruiser ‘Hotel Juliet’, another gesture of working outside the studio/gallery and being in the field for the moment.